The Amazing Growing Bacon and Other Farm Mysteries

I'm officially grossed out.  We all are.  And what's at the center of this nasty little mess?  Bacon.


I'm not a scientist, nor will I ever claim to be.  I have taught science for a lot of years and have found that dealing with agriculture involves a fair amount of science and good farmers are data driven.  So when I hear people ask questions about the healthfulness of mass produced meat products, the pricing of grocery store meats versus those from smaller producers or get the inevitable questions about words like "pasture fed", "free range" and "natural", I start doing my homework.  I read articles, get information from a variety of sources and even do my own experiments.

Recently I've spoken with several people about bacon and have read some articles offering surprising facts on bacon.   One article I read talked about the smoking process some commercial bacon goes through - including being injected with water and liquid smoke so they can masquerade as smoked bacon.    As I read this, I kind of felt a little ill, so I decided to do a little test at home to compare our bacon and a commonly available store brand to see just what the difference would be.

We started by checking out pricing at our local grocery store to compare our prices with what is available at the markets.  I would not have done this experiment if I'd had to pay full price for store bacon.  But I found this little gem on sale for $2.88 for "thick cut bacon".  There were others varieties that might have been more comparable to our bacon product, but they were between $7 and 8 per pound and I refused to pay that much for the sake of science. 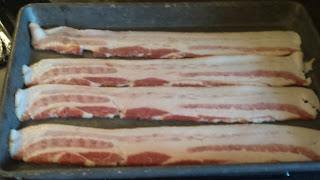 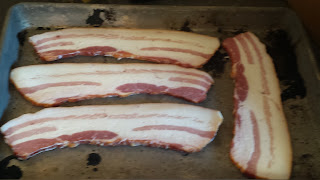 Store bought bacon - 4 slices weighing in at 5.7 ounces as a group.

Prairie Center Meats bacon - 4 slices weighing in at 6.1 ounces as a group.


Here is the side view of one of our slices of bacon: 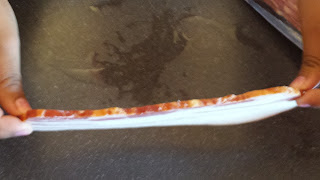 And here's where the experiment started to get really funny.  We tried to take a picture of the store bought bacon from the side view but it wouldn't hold it's shape.  In fact, just like magic, every time we touched it, the bacon grew, and grew, and grew... 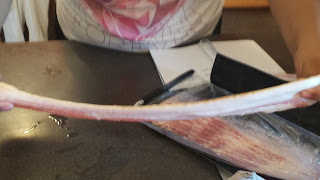 Okay, so back to the experiment.   We put the two pans of bacon in the oven at 425 degrees and checked them at 10 minutes.  Here's the before picture and the 10 minutes in picture.


After about 5 more minutes the bacon was done - the store bacon finishing a little earlier than our bacon.  So here's the final product - our bacon on the left, store bought on the right. 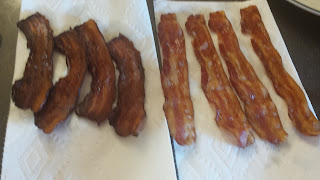 I took this picture just to show the degree of shrink from the store bought bacon.  It lost a good 3+ inches in length through the cooking process. 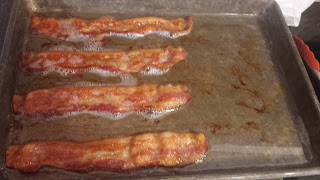 Since both products contain some water as part of the curing process, it's my assumption (not a very scientific word, I know) that the mysterious lost weight was water that evaporated in the cooking process.  This makes sense, knowing that some bacon available at the grocery store is pumped with water.  I'm also assuming the larger water content has something to do with the amazing growth properties that bacon seems to possess.  Not necessarily a positive trait, unless you're a bored 10 year old looking for something to mess with on a Saturday afternoon.

The take-away, in my book, is this - grocery store bacon is cheaper.  I totally agree with that.  However, it is only cheaper in the sense that you are paying less for it, but you are also getting a completely different, and in my opinion, inferior product.  When you compare the flavor and quality of the bacon (or any meat for that matter) available from local producers, there is a completely different set of scales to be used. Pricing for our product is based on the cost of our inputs and current markets, which we research frequently to stay competitive.  We never intend to compete with your local grocery store - our hope is that our product is not the same as what you get there.  We want our product to be better, therefore letting you feel better about your purchase.

I will leave you with two other tidbits from the bacon experiment.  The first is that my little scientists became taste testers and even though the bacon was meant to be used for BLT's that night at dinner, I ended up having to cook more because it disappeared faster than I could make toast.  The other piece of information is that the remainder of that little package of bacon from the grocery store is still in my fridge and I'm not sure what to do with it.  Sad, sad little bacon.  Anyone need meat for a magic show?

Posted by Krista Wilson at 2:22 PM