The Reason I Learned to Cook

We definitely all have skills and talents in particular areas.  My husband, Chad, always says life is as  much about learning what you DON'T want to do as it is learning what you do want to do.  Life has provided many of those opportunities for me and I had a great reminder of one of them this morning.

My parents had cattle when I was young and I feel as if our fencing was less than stellar.  I have that sense because it seemed as though our cattle spent a great deal of time wandering freely, rather than staying safely behind the fence.  Maybe we had free-range cattle before it was en vogue?

As a farm kid, I had the opportunity (said sarcastically) to help with farm tasks.  This was not a strength of mine.  Really, I was very bad at everything farm related.  I was given a chance to cut cockle-burs out of the soybeans to earn some money.  I bailed after about 10 minutes because my "toes hurt".  I would like to add at this point that this was a legitimate complaint because I did have ingrown toe-nails as a kid.  I had a brief stint as an animal rights activist when it came to helping with de-horning the calves.   Once I had a chance to help do something with a tractor and some cut hay.  The fact that I don't even know what it was called should indicate how well that particular activity went.  All I know is that whatever I did to "help" required my dad and brother to do it all over again!  I hid pea seeds in my dresser drawer to avoid having to plant them all and I totally hated getting up early on my summer break to walk through the corn patch picking sweet corn to sell with all those dew-laden tassles and corn leaves whapping me in the face.  Picking the wild blackberries with all the mosquitoes and thorns in the back thicket of the Bradfield Place was miserable.  But the worst for me was when the cows got out. 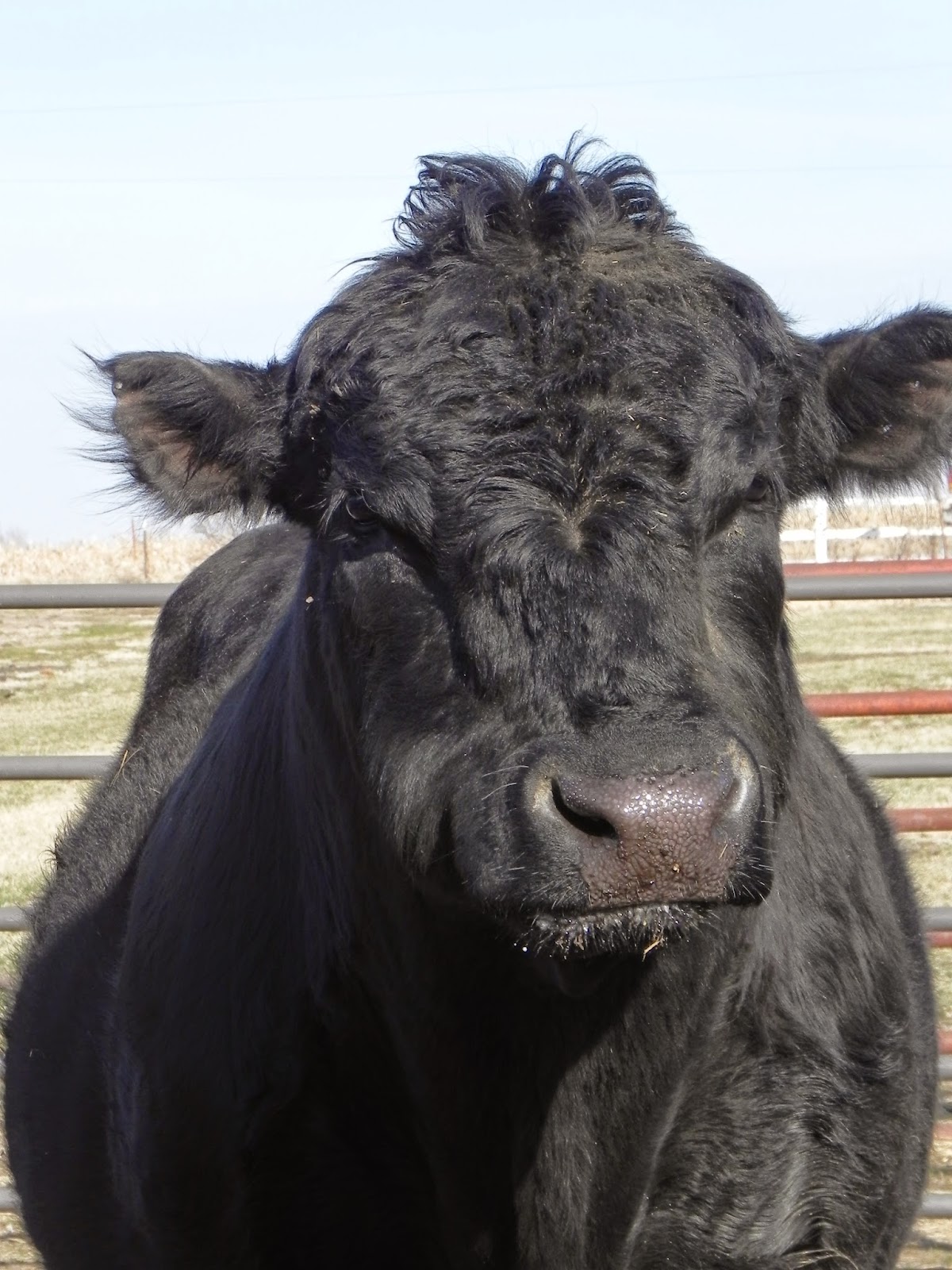 I was small, the cows were big.  When you are 8, cows are big.  Unfortunately, when you are 39, cows are still big.  I remember standing in front of those beasts who stared me straight in the eye and I'm certain they smelled my fear.  My dad would yell, "Be big!  Be a fence!"  I stretched my 8-year-old arms as big as I could and I think they just laughed at me, in their bovine way.  I have to confess, that if they made a move in my direction, it was over.  There was no being big, I was done!  Go ahead, Madame Bovine, have your way!  My life was too precious to stand my ground.

There is a story that is part of family lore, and I honestly don't remember it but enjoy hearing it told.  Apparently, there was one day that we were once again rustling up the loose cows and I had had enough.  After being told for the seemingly millionth time to "be big", I said I was done and walked home.  I have no idea where I came up with the nerve to do that, but it ended up being a good move for everyone.  It was from this point on  that I learned to cook.  This was my contribution to the farm.  Everyone else would do farm-y things and I would stay home and make sure meals were ready.  I had the best time planning menus from my mom's recipe box, developing meal themes and even decorating table-scapes to go with them.  It was a total win-win for all of us.  I learned to work within my strengths and my absence was a most excellent blessing to those who actually had work to do on the farm.

This memory came back to me this morning as I was sitting at the kitchen table.  I looked up from posting pictures to Facebook (you know, that thing you do when you should be cleaning the house to get ready for Easter guests?), when I looked out the windows and saw 5 black Angus steers in the backyard.  Chad was in the shower and I felt the fear of my childhood well up inside.  I frantically pounded on the walls to our bedroom, since this was the one morning he had locked the bedroom door.  "The cows are in the backyard!" I yelled.  He yells back, "Are they just in the back?"  I yelled, "So far!"  And then he yells, "Well, just make sure they don't end up in the front!"

Crap, I say to myself.  Here we go again!  So I go out front, and sure enough one had broke off from the herd and was in our neighbor's field heading towards the road.  I kept my distance, but flailed my arms in an attempt to steer him (no pun intended) away from the road.  He headed across the front yard to catch up with his buddies.  I continued to stay back a safe distance and occasionally pulled out my dad's tricks - be big, be a fence, flail your arms wildly and clap then yell "sa-boss" which is supposed to be the magic word that makes a cow obedient.  They stayed contained but obviously did not consider me to be an authority figure.  Soon Chad came running across the yard carrying a bucket in an attempt to lure them back in the pen.  You could see them weighing their options - grass, corn, grass, corn...  They of course chose grass and started to move towards me.  As Chad poured the bucket of corn in the feed trough, they did opt to head toward the pen but then stopped in the middle of the driveway at the pile of corn he had spilled in his haste to get into the pen.  He yells at me, "Walk up!  Just walk up on them!"

I can do this, I say to myself.  I take a step towards the leader of the pack and he looks up at me.  Our eyes lock and I feel that panic.  Chad yells again, "Just walk up on him!"  Deep breath.  I move another step closer, then another step.  His dark cow eyes followed my every step.  Then, slowly he turns and magically leads the herd back into the pen.  My sweet husband pats me on the back and says, "Good dog!"

I did it!  I conquered my fear and helped on the farm.  I'd like to say I won't have that feeling of terror if it happens again, but I can't say I'm there just yet.  But for now all is well and the steers are where I like them - behind a fence.

So, in honor of my learning to cook and to celebrate cows behind fences, I'm going to share a family recipe, one that my Grandma Audrey made for her brood when they were young and passed on to the rest of us.  I hope you enjoy them! 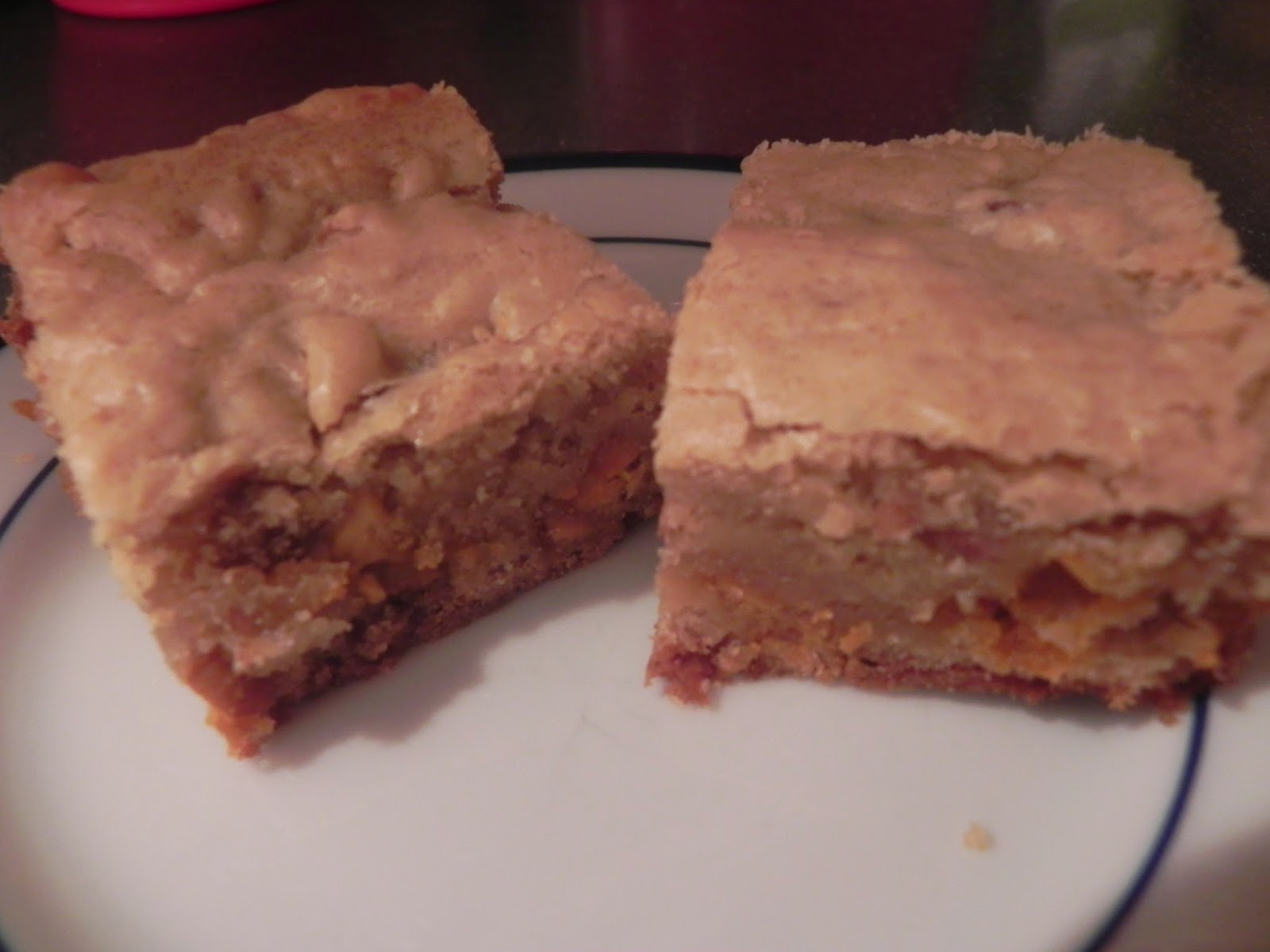 Preheat over to 350 degrees.  Mix melted butter and brown sugar with a mixer.  Add the eggs, one at a time, beating until mixture changes color (it will get lighter brown).  Add dry ingredients and mix until well blended.  Stir in nuts (if desired) and chips of your choice.  Pour batter into a greased 9x13 pan.  Bake 30-40 minutes until browned and set on top (not jiggly).  Cool and cut into squares.

My grandma has a note on this recipe in our family cook book that says:
One of our old family favorites and used often.

Posted by Krista Wilson at 10:53 AM No comments: