Mama Duck - I salute you!

I was out for a walk on the farm one day this week and was struck by the multitude of life metaphors and quips that exist on the farm.  The grass is greener on the other side - hence the escaping cattle.  Following like a sheep - if you have a bucket of feed (or quite frankly even rocks in a bucket), they will follow you everywhere. How we "tend our garden" is a metaphor for taking care of our own lives.  But the thing that struck me in particular came from a mama duck.

We have a large group of Muscovy ducks that roam freely on our property.  They are not an entirely attractive bird, in fact a friend the other day commented on how ugly they are. They have red, bumpy faces and some of the males have bouffants that would rival Elvis.  I've always been a fan of ducks in general and since we ventured into poultry they have been a staple on the farm.  Their purpose?  To make me smile!  Female ducks are the loud ones and I love to hear their loud quacking.  It always sounds like someone just told a really great joke.  It totally "quacks" me up!

But the Muscovy ducks actually have a farm job - fly control.  They eat the fly larvae out of the animal's "eliminated material" and are a natural way to keep flies at bay.  This year we never got them officially moved back in animal pens so they are just free ranging in the yard.  Another perk to the Muscovy is their maternal ability.  I believe we have at least 3 nests in various nooks around the barn and yard.  They will lay collectively in a nest location then one lucky lady is the "sitter".  But she also gets the exciting role of being the mama. 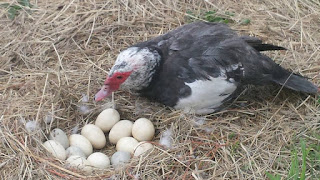 We have one hen that has been exceptionally tenacious.  She sits day after day on her nest.  It's obvious when you look at the eggs that some of them won't make it, but she stays and sits.  She's just doing what a girl duck does.  And we all hope that her efforts will soon pay off with a brood of fluffy little cuties that will follow her around the yard - keeping her busy putting her ducks in a row.  Ha!

As we sit on the cusp of Mother's Day, I realize the importance of mothers, but as a farm girl I have learned that giving birth doesn't make you a mom.  We've had moms that have had babies and wouldn't do anything to help them survive.  We've had moms step in when they've lost their babies and take care of other overwhelmed mothers with too many babies.  I've listened to the recently weaned babies cry all night for their mothers.  Shoot, we have a house full of girl chickens that would just as soon eat their eggs as sit on them!  Then there's the mama duck who has pitched in and watches the other hens gallivanting around the farm yard while she sits on their eggs.

Just like on the farm, giving birth doesn't make you a mom.  It's the heart of a mom that earns those credentials.  I salute you, Mama Ducks!  Thanks to all of you for your mom skills and I hope on this Mother's Day, no matter how the world views your role in mommy-dom, that you see your mommy contributions in a new way.  Maybe through the eyes of the little ducklings who look to you as a model of what a duck should be.