For the Love of Lard

The noble pig, the gift that keeps on giving.  I've heard lots of funny quips about the pig and it's utility.  We use everything except for the squeal.  It's useful from snout to tail.  I can't really think of anything else on the farm that has so much to give.  They have become a euphemism for being unkempt, greedy and unkind.  And yet, they produce one of the foods that every chef covets - bacon.

I never thought I would say that I actually enjoy the pigs.  I heard stories as a child about pigs eating farmers whole, leaving nothing but the bones behind.  I've heard my mom tell of a day when the pigs ate her favorite little chair and Uncle Wiggly book which she accidentally left behind in the hog house.  I've never thought to ask why she was reading in the hog house, but it shows the "vicious" nature of these beasts.  Or, maybe they're just incurably curious.  To be totally honest, I find them humorous.  They absolutely live their lives with sweet abandon.  They throw themselves wholeheartedly into everything they do and can find ways to make everything fun.  A feed pan is a toy providing endless entertainment.  They embody the song "Don't Fence Me In".  And when it rains, they don't head for shelter.  A whole new opportunity for fun has just opened up when the rain drops start to fall.

While I appreciate their zeal for life, I also appreciate the gift that they give.  They provide a wider variety of meats than any other animal, along with their hides and their marvelous fat.  I've recently expanded into the world of lard making and enjoy it greatly.  After spending my morning transforming two trash bags of fat into 36 pints of lard, my hands are positively luxurious.  Lard has gotten a bad rap over the years, but it has a long history of many uses including soap and candles as well as making about the best biscuits you can get your hands on!  It does not have the smokiness of bacon or really have any strong taste at all.  It keeps fairly well and can be used to replace more processed oils and shortenings.  Pie crusts, cookies, the list goes on and on.  And we even cooked our pancakes in it last night to celebrate National Pancake Day.

There seem to be so many questions these days about where our food comes from and I've seen articles on Facebook touting various forms of oil as the best.  Use olive oil, use canola oil, don't use vegetable oils, don't use canola oil, blah, blah, blah.  I don't know what a canola is or how they get oil out of a vegetable.  Everyone has an opinion and I'm always skeptical about those opinions because I feel like it's all based on whose footing the bill.  What I can tell you about lard is that it has one ingredient - lard.    Lard comes from melted pig fat.  The fat is placed in a pot and melted until the fat portion becomes a liquid and separates from the meatier portion, which when cooked long enough becomes cracklings.  The fat is then strained and cooled, forming a solid which can be used in place of solid shortening or melted again to be used as an oil.  I'm not a dietitian, but from what I've read it is higher in Vitamin D, which is used to absorb calcium, than other fat sources and it is a source of healthy saturated fats which do have some health benefits.  It's locally produced and just makes a nice quality food product.

I'm including my new favorite pie crust recipe which uses just lard as shortening to produce a marvelously flaky crust.  It makes enough dough for 3 crusts and can be frozen in dough rounds to use later.  I was super impressed with this dough and how it held together.  And believe me, I've tried a lot of pie crust recipes!


My Best Pie Crust
Sift 3 cups of flour and 1 teaspoon salt into a food processor.  Add 1 cup lard and pulse until it's crumbly and there are no large pieces of lard remaining.  In a cup or bowl, mix 1 well beaten egg with 3 tablespoons cold water and 1 tablespoon vinegar.  Turn the processor onto a low speed and slowly add the liquid ingredients until the dough starts to come together.  Turn it out on a lightly floured surface and work together into a soft dough.  Divide the dough into 3 portions (about 9 ounces, if you're the precise weighing type!).  Use the dough immediately or wrap in saran wrap and freeze for later use.  Bring to room temperature before rolling out.

If you don't have a food processor, you can just cut the lard into the flour mixture and then stir in the wet ingredients with a fork just until combined.

If the dough won't come together, slowly add up to 2 tablespoons more cold water until it comes together.  Don't overwork the dough - it makes it very tough.

I baked the crust at 425 for about 15-20 minutes, using my pie weights and foil for the first 10 minutes to use for a cream pie or whenever you need a pre-baked crust.


Posted by Krista Wilson at 1:28 PM No comments:

Everyone has their favorite season and favorite holidays.  We have different reasons for our preferences - great memories, well-loved activities, birthdays.  As a life-long Kansas girl, I enjoy all of the seasons and would have a tough time adapting to a place where there was no snow or the leaves didn't turn the radiant variety of colors we get to experience each fall.  For us, fall seems to be a slow time after a summer that is hot and packed full of garden tasks, canning, and fair preparation.  The holiday season provides a fun respite before a cold and dreary time highlighted by lambing season and the start of calving.  But then comes the spring. 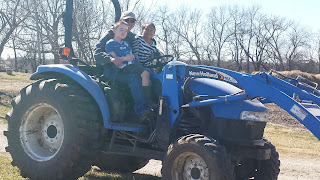 So, in case you have yet to figure it out, spring is my personal favorite.  I find it a poetic time, a time of renewal where the dead is stripped away and new life begins.  From the first peeks of green from daffodils and iris leaves and the yellow and purple dots of color from the crocus, I start to feel excitement.  Seed catalogs fill the mailbox, the windows can be open for the first hints of warm breezes and the reintroduction to fresh air.  My brain, which never truly rests, moves into a special gear only used in the spring. 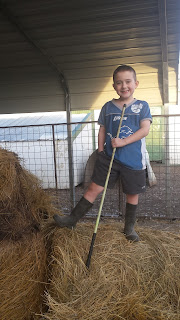 We start to look at the farm with new eyes, refreshed eyes.  We burn the guck off the asparagus patch.  The trimmers come out for pruning the fruit trees.  The dead and dry must go to make room for the new growth. Our 7 year old spends hours looking at poultry catalogs and planning his ideal flocks.  The calves run and leap through the pasture, the lambs jump onto hay piles enjoying the sunshine.

Today was that hint of early spring, and you bet your bippies we were out enjoying it!  I did my annual clueless pruning of the fruit trees and roses.  I really don't know what I'm doing but I make a valiant effort and hope for the best.  We built a new pig pen and moved our future sow herd out of the barn.  They immediately found a tiny wet spot in the new pen and worked together to create a mud pit, luxuriating in the fresh earth.  We released the ducks from their winter quarters and they started scavenging for bugs and other yummies under the hay bales.  The asparagus patch was burned, the remnants of last year's herb garden removed and I had dirty feet.  I love having dirty feet.  It's a sign of a good day. 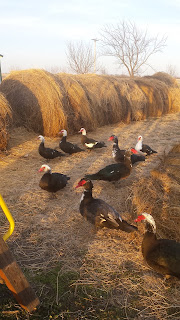 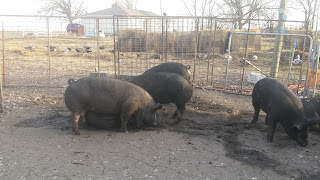 So tonight we will rest after a day well-lived.  The renaissance of spring has begun and I can't wait.  Maybe I'll kick up my now-clean feet and get lost in picking a new pear tree or comparing green bean seeds while enjoying the last of the breeze before it gets too chilly.  Or maybe I will go to bed early and dream of green grass and the joy of spring that lies ahead.

Posted by Krista Wilson at 11:02 AM No comments: